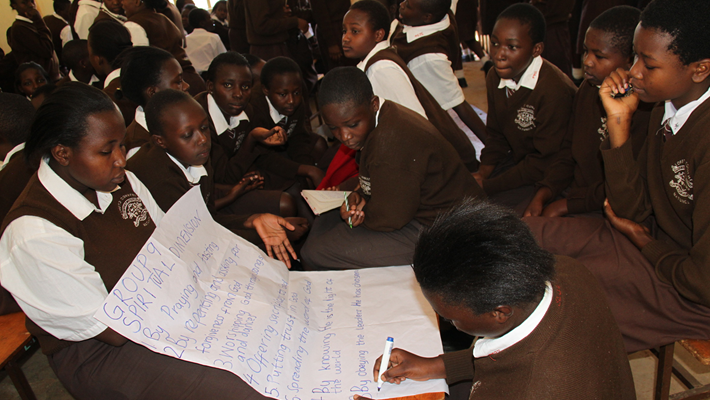 More than a year after an AJAN team introduced AHAPPY to the Loreto Convent Girls Secondary in Matunda, Sr Immaculate Shisanya writes about the changes that the HIV prevention workshop brought about.

It is more than a year since AHAPPY was introduced to our school in September 2013. When I look back, I see just how much it has positively impacted on our students. The program was an eye-opener for the entire school community. There is no doubt that the students and teachers who attended the workshop were touched and challenged by the reflective, educative and youth-friendly material presented.

AHAPPY is gold for African young people because it gives accurate information about human development, sexuality, sexually transmitted infections and AIDS. Before the program was introduced, I was getting worried about the future of our youth, because some were showing signs of being involved in unhealthy sexual behaviour.

The AJAN team played a major role with their workshop, delivering material that provoked students to want to know more about themselves, about different types of diseases and about how to make informed decisions. Most were open to the knowledge shared, asking many questions.

The members of the team were knowledgeable, free and friendly. Some students, who had serious concerns about their health, wanted to hear more and the team obliged. Some were curious and needed special attention from the team members, which they received. Some, who were becoming careless and exposing their lives to risk, had to make up their minds in freedom about what they really want.

By the time the team left our school, the students couldn’t wait. They rushed to the library to get their copy of the AHAPPY Generation manual and other books provided by AJAN. They wanted to know more and since there weren’t enough copies for 480 students, I had to see how to get some more. The Youth Movies for Life and Love were also much in demand.

I became extremely busy in the weekends and in the pastoral sessions and life-skills lessons that followed the workshop. Our entire guidance and counselling department was put to the task to be more available and involved in the lives of the students.

The students themselves started to talk seriously about health and other matters. Peer counsellors and youth ministers took it upon themselves to guide the discussions on unhealthy sexual behaviour and students could speak openly about their problems. At the same time, they started taking more care of themselves due to the knowledge and skills received during the AHAPPY workshop.

In December 2013 I attended an AHAPPY Training-of-Trainers (TOT) workshop. Thanks to the training, I can now use the manual, the core material for the program, to better support my students and other young people. I feel I have become more knowledgeable to answer questions the students ask me. I have learned how to be more supportive to those who are more vulnerable and how to encourage others to be sensitive. As a youth educator, I have begun reaching out to other young people in our parishes and they have found the material to be rich, educative and challenging.

In short, the fact that AJAN team came to our school was a motivation and a moment of hope and renewal for me and the entire school community.

Pilgrimage to raise funds for AJAN