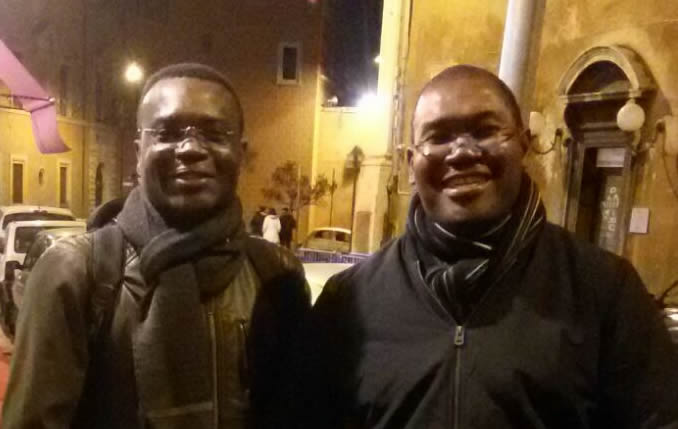 It has been my habit to write a long message by way of sending my Season’s Greetings to you all: partners, friends and co-workers who have been part of AJAN and contributed to its works in so many ways. So it has become quite difficult to me to derogate from this rule! As I embrace this friendly duty now, my thoughts go to AJAN as an institution that is facing a turning point in its history, shifting from 2G to 3G… I mean, to the third generation of leadership.

After serving as AJAN Director for six years, it is time for me to make way for a new companion, Fr Elphège Leon Quenum SJ, to take the lead at AJAN. I look at his appointment to this position by the Jesuit Major Superiors of Africa and Madagascar (JESAM) as providential and one of the best options. This is especially after hearing what members of AJAN had to say, about their vision and expectations for a new leader, during our last General Assembly in July 2015. They called for a man of experience and passion, who has a deep knowledge of AJAN and love for the work. And I am not wrong in saying that Elphège has all these qualities. He was the first regent to work hand in hand with the founding Director, Fr Michael Czerny SJ, to establish AJAN firmly after it was created in June 2002. After theological studies and priestly ordination, Elphège served for six years as Director of the Centre de Recherche, d’Etude et de Creativité (CREC) in Cotonou, Benin.

During the five months that we have worked together closely, and met donors to negotiate their continued support for AJAN, I have seen in Elphège knowledge and love for the work. So the mission of promoting “life to the full” in our sisters and brothers plagued by many predicaments, chief among them AIDS, will continue, bringing blessings and meaning into their lives.

The celebration of Christmas reminds us precisely about such a call: the call to renew our faith in a God who came to dwell in our human history and to redeem us; a God who invites us to lead the battle for love and life, and to continue witnessing to our faith in the midst of troubled human situations, so that the many people in our world who walk in the darkness of marginalization and suffering may see His great light shining in their lives.

At this point, as I look back over 10 years of commitment in the battlefield against HIV and AIDS, I acknowledge in many of you, who have journeyed with me, the angels who announced to the poor: “Do not be afraid; for behold, I proclaim to you good news of great joy that will be for all the people. For today in the city of David a saviour has been born for you who is Christ and Lord” (Luke 2:11). I recognise the presence of God, at work among and for His people, in you all who have made it possible for me and my co-workers and companions in AJAN to bring life and joy in the life of so many people burdened by the yoke of HIV and poverty.

As I express my deepest gratitude for your solidarity and multidimensional support, I wish you all a blessed Christmas and a gracious year 2017. May Emmanuel, “God with us”, renew in us his presence, redemptive action and grace. May he renew in us the consolation of being part of his salvific work in every of corner of the world, as bearers of restored hope in life and joy, so that we may all continue to praise the goodness of the Lord together.

With prayerful wishes for a happy and contentment-filled Christmas and a new year 2017 full of blessings and great achievements.

Zimbabwe: So much to thank God for

Kenya: Responding to the needs of young people today