According to several analysts, the DRC in general and its eastern part, in particular, is lagging significantly behind in achieving the 90, 90, 90 goals of Onusida due to the political instability of the last 5 years characterized by poor governance, political intolerance, and any other form of violence that does not yet say its name in our dear and beautiful Country.  This situation has led to a sense of revolt, despair, anger, and uncertainty among young people, most of whom are unemployed and unemployed. As a result of this bleak picture, a partial relaxation of HIV and AIDS activities is observed and is accentuated by frequent breakages of inputs (tests, antiretrovirals, other drugs, and control equipment).

As AHAPPY is a youth support program for achieving the Sustainable Development Goals on HIV Elimination, the program is concerned with intensifying program activities to achieve the desired results by organizing a 3-day training series of Peer Educators from associations, clubs, groups, and Catholic action movements in Kisangani’s urban-rural parishes.

This year, the first wave of this formation has affected the Paroisse Consolata  Stir, and the Paroisse Saint Gabriel de Simi-simi, with the participation of 20 people, including 13 men and 7 women. The second wave of this will form will be held in the second week of July 2020.

This training has enabled us not only to strengthen the MOU team in the fight against HIV but also to revitalize associations, clubs, groups, and youth movements in the fight against anti-values, self-care, creativity (entrepreneurship), and good management of their groups.

During these three days, several themes of the Programme GHappy generation were Operated including the Introducing the AHAPPY program, the look on the HIV situation in DRC and Kisangani, My body and I, I am a beloved creature of God, Notes basics on covid-19, God and I, Dto develop my intellectual qualities, CSTI onts, five dimensions of life, values and virtues, factors of vulnerability to HIV infection among young people, animation technics,  etc.

After the training, my joy is to note that 8 out of 20 participants including 4 men and 4 women voluntarily agreed to take the screening test before engaging in the awareness of their peers. This act not only reflects the confidence of young people in the work of the Maisha Centre in the principles of confidentiality and supervision, but also the desire to lead by example and The determination the new team to push leucomrades to know their serological conditions, in order to protect themselves.

We firmly believe that the young people trained in these days will pass on the information received within their respective groups and movements so that every young person present in these structures can lead a fulfilling life, in harmony with the laws of God, the Church, and the State for its full development.

From these facts, I can say that what is already being done on the ground is to be encouraged, but there is still a long way to go. In the hope of God’s grace, we will achieve this. “A M D G”

A family photo was taken at the end of the training. 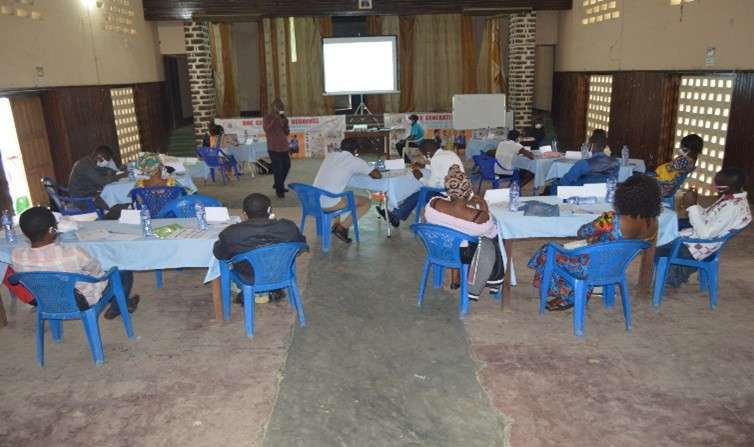