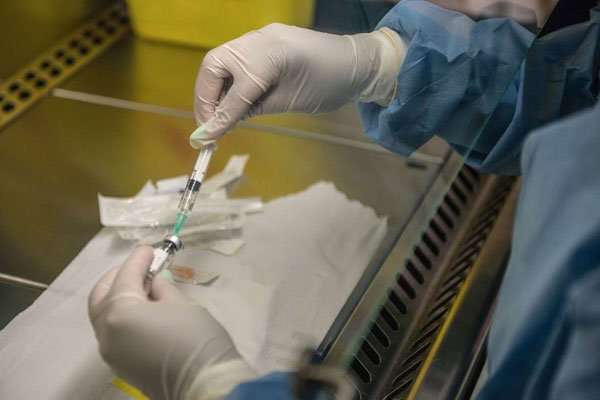 In this file photo taken on November 30, 2016, a person holds an experimental vaccine against the AIDS virus in Shoshaguve, near Pretoria, as South Africa launched a major clinical trial of the experimental vaccine, which scientists hope could be the “final nail in the coffin” for the disease.

The study, named HVTN 702, began in 2016 and involved the only vaccine candidate ever shown to provide some protection against the virus that causes AIDS, in an earlier trial in Thailand in 2009.
The trial enrolled about 5,400 HIV-negative volunteers at 14 sites across South Africa, consisting of sexually active men and women aged 18 to 35 years old.
It found that 129 HIV infections occurred among the vaccine recipients, and 123 HIV infections occurred among the placebo recipients, and the trial was therefore called off.

US health authorities said Monday they were halting a trial in South Africa of an experimental HIV vaccine after it proved ineffective at preventing the infection.

“An HIV vaccine is essential to end the global pandemic, and we hoped this vaccine candidate would work,” said Anthony Fauci, director of the National Institute of Allergy and Infectious Diseases which sponsored the work. “Regrettably, it does not.”

The trial enrolled about 5,400 HIV-negative volunteers at 14 sites across South Africa, consisting of sexually active men and women aged 18 to 35 years old.

They were randomly assigned to receive either the vaccine regimen or placebo injections, receiving six doses over 18 months.