30 April 2013 – After more than eight years of devoted service, Br Alain Ragueneau is no longer a permanent staff member of the Uzima program for people with HIV in Kangemi, a poor suburb of Nairobi. He shares with us snippets from his journal entries and other writings over more than 10 years, which reveal how responses to AIDS, and the disease itself, have evolved. We at AJAN have worked with Br Alain frequently over the years – Uzima belongs to the Jesuit parish in Kangemi, where AJAN House is based – and we thank him for his tireless service and the invaluable lessons of compassion and common sense that he has taught us over the years. We are happy he will stay in Nairobi and remain involved in Uzima and with AJAN. 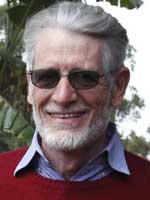 2002: After working for 17 years in the Nairobi slum of Korogocho, Sr Jill, a doctor, insisted on the need of spiritual accompaniment of the sick. Nowadays there are many NGOs, dispensaries and medicines distributed. But who cares for the spiritual needs of the people? She asked me to organize each month a prayer group with the sick in Korogocho. (In 2013, this remark of Sr Jill still resounds in me.)

2002: With admiration I listen to the sick mothers. Where do they get this energy, this strength of life, this faith? They stand firm because they are able to gather all their strength in the present without being crushed by the uncertain weight of the future and they know how to receive with gratitude each meal, each visit, each new day up to the last. All is gift.

To last in this work, I have to learn how to receive the suffering and the burdens of my brothers and sisters in humanity, but not to keep them with me. I have to entrust them to Jesus who alone can bear them because he alone can give them fecundity.

2003: I accompanied Anne, who was dying in a small room full of fleas, with her two children aged nine and 13 sleeping beside her. She was quite aggressive towards her children and her sister who came to look after the room and the laundry once a week. And then, during my last visit, Anne had trouble to breathe and turn her head, and I took it into my hands like an offering. We remained in silence for a long time, and then she said, “I am no longer afraid”.

“And that He loves you.”

“And also your children.”

A few days later she left in peace for the encounter with this God who loves her. Anne had three children from different men, she did not go to church much, but she made me a gift with her “I am no longer afraid” after months of internal struggle, which I keep as a treasure, as an echo of the Word.

The Uzima program started discreetly in 2004 with a small support group, offering a place, a ‘stigma-free zone’ where people with HIV could feel welcome, free to share their anxieties and hopes; where they could learn how to live positively and renew their strength, where they could pray together, people from different Christian denominations and different religions. Bit by bit, they became involved in the prevention activities of Uzima, with parish groups, schools and among the community at large. Uzima Day became a major yearly event in Kangemi.

2004: Our support group has started with two women of ‘Beirut’, a neighbourhood of Kangemi where plenty of alcohol is sold, where there are many single mothers. Above the rusted iron sheets there was a tree with splendid flowers. I thought: it is just and good that the support group starts with them, the poorest, the ‘crucified people’.

2007: I often say, “to be sick is a tough job”. They agree even if I am not sure what meaning they give to the sentence. But surely they know it is tough and guess it is not without meaning for themselves, their family and the world. Even if they have never heard John Paul II saying that a human being, in any part of the world and at any time, can share the redemptive suffering of Christ, they know they have a place in our human family and even a task to accomplish.

2009: Recently we had a day of recollection at the Resurrection Garden [a shrine] with 40 members of the support groups. One of the women said: “I love my viruses because they have given me friends; before in Nairobi I was isolated.” It is true that the virus breaks down many barriers. During the day we had time together and long periods of personal prayer. It was impressive to see the recollection of this large group and, in the evening, the joy and energy of the group during the return trip! It would lead you to believe that a day of prayer in the fresh air does more for the health than many treatments.

All these encounters, my years at Uzima, have made me more human.

2013: If during the first years we accompanied a number of terminally sick patients, the situation has changed dramatically and now most of our members are strong and need to work. To empower them economically we have income-generating activities and a savings group. We network with other organizations – AJAN being one of them – in order to enlarge, improve and strengthen the support offered.

AIDS is not just an illness among others because of the strong stigmatization attached to it. Although the condition of people with HIV has improved dramatically, they still need to experience the concrete, effective love of God for them through the ministries of the parish.