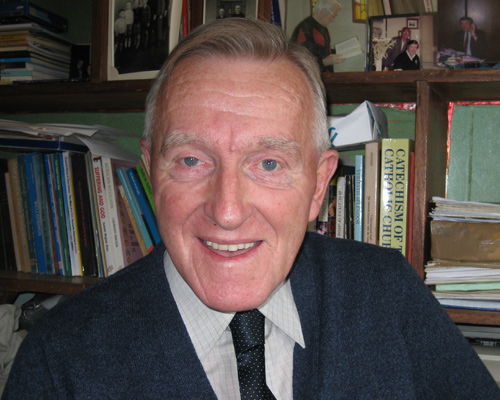 Tullamore, the home town of Fr Kelly, conferred one award for his international contribution to education and health in the developing world. At the ceremony in the town hall in November 2013, the Mayor mentioned Fr Kelly’s achievements in the education sphere in Zambia, where he has spent most of his life and served as Professor of Education and Deputy Vice Chancellor at the University of Zambia. A government spokesman described how Fr Kelly had contributed to Irish Aid’s tackling of AIDS, and how he had worked with them in forming policy.

Michael Kelly, namesake and nephew, recalled that Fr Kelly was one of three brothers who joined the Jesuits and spent their lives as priests in the service of the Lord. In reply, Fr Michael mentioned other local people who as Jesuits had made their contribution to Zambia, including his own brother Bob, whose final resting place is in Zambia. He accepted this award on their behalf as well.

The second award came from the Irish Missionary Union. At the inaugural award ceremony, which was held in November 2013 at City Hall in Dublin, Mrs Sabina Higgins, wife of the Irish President, hailed the “great and well-earned reputation” of Irish missionaries. The missionaries present, among them Fr Kelly, each received a medal.

Fr Kelly is especially well known for his work on the interplay between AIDS on the one hand and social justice and education on the other. He has authored two widely quoted books on the subject that were published by Paulines Publications Africa and co-sponsored by AJAN: HIV/AIDS – a social justice perspective (2010) and Education – for an Africa without AIDS (2008).