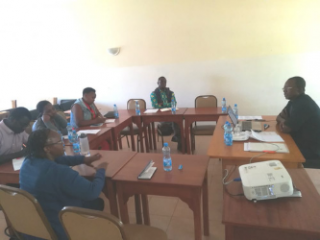 On 8th March 2019, Fr. Joachim Zoundi, SJ, PhD lecturer at Hekima University College School of Theology made a powerful presentation on how to protect the child by dealing with child abuse thoroughly by using most effective strategies.

This was during a workshop organized for AJAN staff by director Fr. Elphège Quenum

The aim of the seminar was to enable AJAN staff to be better informed and equipped about the dire need to raise awareness on child abuse in the society and to better appreciate the pertinent issues of accountability and responsibility. This is in line with AJAN’s mission through its HIV and AIDS Prevention Program for the Youth (AHAPPY) which seeks to empower the youth in Africa to live responsibly. All staff at AJAN attended the seminar. Fr. Zoundi went on to teach about; handling human sexuality, the reality and impact of violence against children and the need to protect children by taking deliberate action.

To kick off the important engagement, Fr. Zoundi referenced important resolutions that emanated from a CP summit in the Vatican chaired by Pope Francis and which brought together over 194 bishops from all catholic conferences across the globe. In his concluding discourse, the Pope observed that “It is time to eradicate abuse and cover up of child abuse in the church”. Citing Jesus Christ who said “Whosoever causes one of these little ones who believe in me to sin, it would be better for him to have a great millstone fastened around his neck and to be drowned in the depth of the sea” (Mt 18:6-7), the Pope made it clear that the evil of child abuse is rather scandalous when it happens in church as it strips it off its precious moral authority in the society.

Consequently, the Pope led his team in making eight resolutions towards overcoming the wickedness primarily; protection of children, treating each case of abuse with impeccable seriousness, better criteria at selection of candidates to priesthood in order to foster holiness and the virtue of chastity, strengthen and review guidelines by the episcopal conferences, accompaniment of the abused, better control of the digital world and lastly but not least to stop sexual tourism. These aspects were discussed in detail by Fr. Zoundi who all along invited participants to react and weigh in during the sessions.

Drawing inspiration from the Pope, Fr. Zoundi led AJAN staff through an exciting exercise designed to illuminate child protection. It involved a team devotedly protecting balloons up against a team determined to burst them, the balloons representing our children.

The balloon-bursting exercise underscored the fragility of our children and the grave need and responsibility to unfailingly cover them.

The AJAN team was able to refresh their minds on important basics of child protection such as the realization posited by UNICEF that children from all walks of life undergo violence and that millions more linger at risk. With the vice taking many forms (physical, sexual, emotional abuse or neglect or deprivation) children protection has to be prioritized. Perpetrators of violence (in various settings where the child dwells) include; members of family, teachers, priests, pastors, neighbors, strangers or other children. The seminar served as a reminder that safeguarding children from all forms of violence is a fundamental right guaranteed by the Convention on the Rights of the Child (CRC) and other international human rights treaties and standards.

According to Fr. Zoundi’s resounding presentation, plenty of violence against children and its enormous impact can be prevented through programmes thoughtfully designed to address root causes and risk factors and not shallow strategies that cannot stand the test of dynamics involved.

Therefore, INSPIRE, a strategy fronted by; UNICEF, WHO, US CDC, UNICEF, End Violence Against Children, PAHO, PEPFAR among others in the paradigm of child protection, becomes very important. This was discussed in detail leaving the AJAN team thoroughly impressed and puffed up.

INSPIRE exists to strengthen the CRC and reflects the dire need to address the huge public health and social burden created by violence against children. It is a package of seven proven strategies that avail a structure (for ending violence against the world’s children) alongside two alternate activities that help to unite, support and evaluate progress towards the seven strategies. AJAN staff will be enthusiastic to learn and research more on INSPIRE.

Indeed, through the resolutions at the recent conference in Rome, the Pontiff establishes a new order, where nobody should go unpunished as the church delves deeper and proliferates its energies in order to deal child abuse a deathly blow. The workshop was indeed one more effort in this regard and more specifically, a directed attempt at strengthening AJAN’s agenda in overcoming the challenges posed by HIV/AIDS in Africa. The Sisters of St. Joseph’s Center, Karen, Nairobi was the location of this training and participants enjoyed perfect hospitality.